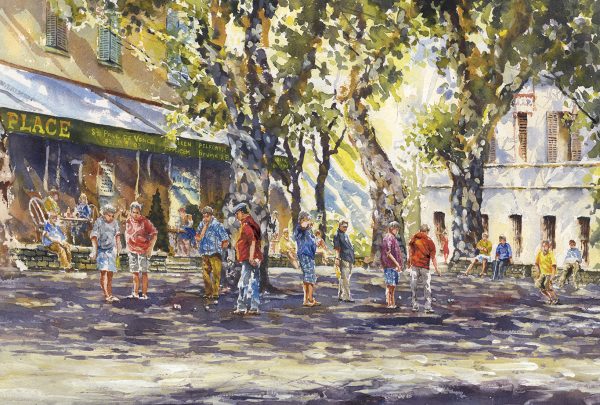 This is St’ Paul De Vence near Nice and shows a typical French game of boules or Petanque. I used a heavy gouache paint to try to capture the dappled shade on the ground and the Plane trees.

The silver balls are thrown with a back hand twist to land near the jack rather than rolling along the ground. In the painting there are two games being played alongside the cafe. The man in the black shirt near the middle of the painting has a lot of years experience at Petanque and he is known as the shooter. His job ,if the opposing team have balls near the jack, is too lob his boule quite strongly and hopefully crack the other player’s boules away from the jack.
As we sat and watched he was very successful at this for a number of times.

There are no reviews yet.

Be the first to review “France, Playing Boules”Cancel Reply